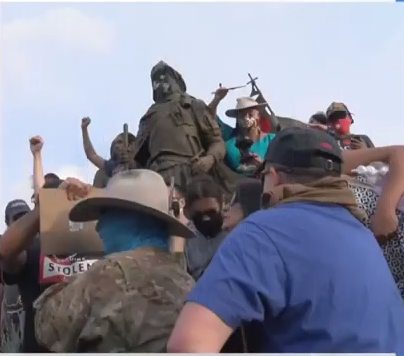 For those of you who have attended my Conceal Carry Classes, you may have heard me talk about a local Albuquerque man named Charles Baca. Quick recap, Baca was involved in a shooting near Old Town Albuquerque in the summer of 2020 when a protest to remove statues was occurring. From my perspective, politics aside, here are some facts that we know of this case. A protest did take place. Statues were being torn down and destroyed by normal people and not city or state officials, at least not this day. There is a lot of video showing a lot of physical “man-handling” of people by other people besides Baca. It is not just a small, quiet, peaceful protest. And I am in no way saying who did what and where, except as it relates to this case. Charles Baca did shoot multiple times. Video clearly show people threatening him not only with words, but with forms of weapons. Here is the link to one of many articles on this subject.

Here is another link. Understand I do not agree nor disagree with any political comments made. https://www.ammoland.com/2020/06/propaganda-aimed-at-self-defense-in-albuquerque-shooting/#axzz6nJgf9rVg

From our Conceal Carry Training, we discuss 4 Rules for the Use of Deadly Force.

2. You must be the innocent victim.

3. There are no lessor means to stop the threat.

4. There is no escape available.

Charles Baca states he felt his life was in danger. He can be seen trying to run away from the scene before he pulls his gun. He is shown in the video shooting pepper spray to defend himself. Initially, there was no evidence to prove he was NOT an innocent party in this altercation. Here is one video of many on the internet about this incident.

You can clearly see, he was attached by someone with a skateboard. He tried to escape and could not. At one point, he has 4 people preventing him from leaving.

Here is another video of the news story and witnesses.

In the next video you can see Baca “yank” a women to the ground. Check out the scene around 1: 15 seconds into it and you can clearly see this.

So let’s get deeper into the case study. I am not here to determine innocence, guilt, or establish facts that support things one way or the other. I want to study this case to see what happened and to see if we can use this to prevent ourselves from becoming victims.

Let’s look at each rule. Did Baca feel his life was in danger? If I was being attacked by 3 people, 2 of these have weapons and I was already hit on the head with a skateboard, I would think yes. So let’s say yes for this. Did he have a lessor means to stop the threat? According to the video, he had pepper spray that was used and it did not stop the threat. So yes again, but it failed so he had to move up the scale of weapon he used. Did he have an escape route? Kinda. But did he take it? Sure, he is clearly seen moving away from the statues and crowds but at least 4 people follow and at least 3 of them attacked him. Again, clearly seen on the videos. So no, he did not have an escape route at the time he pulled his gun. So up to now, we can say, rather clearly, that he met 3 of 4 rules. He was in fear of his life, he could not escape, and he had no lessor means to stop the threat. What about the innocent victim part?

HERE is where all of Baca’s troubles do seem to start. Had there been no “yanking” a woman to the ground, then Baca would have clearly met the last Rule of Use of Deadly Force and there would be no justification for charging him for a crime. BUT as you can see in the video, Baca does throw a woman to the ground. That act has a clear and visible sign that tells law enforcement, judges, and potential jurors that he is not the complete innocent victim in this shooting.

Charles Baca has been released from jail back in June of 2020 but he is still facing charges and has been restricted from carrying firearms and attending protests. Again, I am not here to defend nor convict Baca as I just want to study the case for others to learn and understand. As a firearms instructor, it is easy for me to say, do this, don’t do this, and you will be fine. I was not in Charles Baca’s mind when he decided to pull his gun, I was not at the event, and I am not going to comment on my thoughts, concepts, ideas, and political ideology on this subject so I cannot judge. What I will tell you is this. As part of any shooting investigation, the police and attorneys are going to look at all of the evidence available to them. Had Charles Baca not thrown a woman to the ground, he would have met all 4 Rules of use of Deadly Force and the prosecutors would be hard pressed to charge him and then get ANY charges to stick.

Remember the 4 Rules of Use of Deadly Force. If you follow them, and it can be proven that you followed them, your chances of being charged for a crime for a shooting are much lower.

2. You must be the innocent victim.

3. There are no lessor means to stop the threat.

4. There is no escape available.

This is written by Keith Kolb. These rules come from the USCCA’s curriculum pertaining to Rules of the Use of Deadly Force. I won’t comment on any other support for or charges against people named in this article. I purposely left out NM Law concerning escape routes and stand-your-ground rules. To learn more about the rules and laws concerning concealed carry, stand your ground in NM, and castle doctrine in NM, please attend one of our classes.